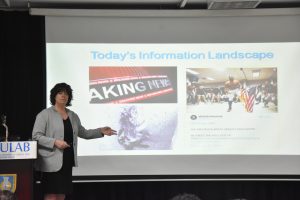 Barbara McCormack having an enlightening session on how to identify fake news.

Media Studies and Journalism (MSJ) department at University of Liberal Arts Bangladesh (ULAB) organised a seminar on how to identify fake news at Campus A Auditorium on October 9. Barbara McCormack, vice-president of Newseum, was present at the seminar -- “Fighting Fake News: Identifying Responsible Journalism” -- as the chief guest.

Barbara talked about the difference between fake news and real news. She also showed how to identify the fake news. After her session, she also answered the questions from the audience comprising faculty members and students. Dr Jude William R. Genilo, head of MSJ, handed over a crest to Barbara as a token of appreciation.

Earlier, Professor Imran Rahman, special adviser to ULAB Board of Trustees (BoT), delivered the welcome speech. Following that, Professor Dr Din Mohammad Sumon Rahman of MSJ briefed the audience about the FactWatch, the fact-checking initiative of the department. Nicholas Papp, public affairs officer of US Embassy in Bangladesh; Naveed Akbar from EMK Center; Faroha Suhrawardy from The American Center; were present. At the end, ULAB’s Pro-VC Professor Dr Shamsad Mortuza thanked the guests for their visit. 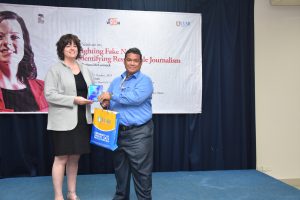 Dr Jude William R. Genilo, head of MSJ, handing over a crest and a gift pack to Barbara as a token of appreciation.